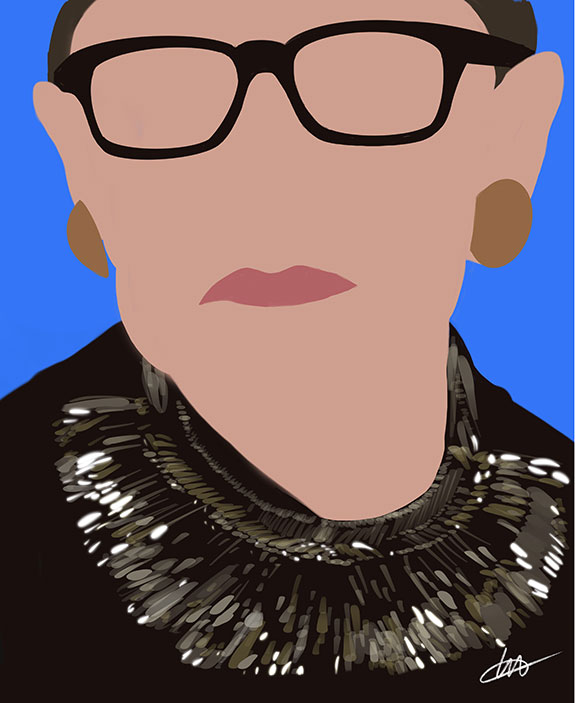 My first thoughts upon hearing that Ruth Bader Ginsburg had passed away were selfish. They were not reflections on her resting in peace, of the loss for her family and colleagues or the end to her suffering but thoughts of my own personal melancholy. I dwelled on how we are so fu*ked with the imminent possibility of a judge who will be selected and vetted solely along partisan lines and certainly not by the content of their character.  I have since pulled myself together and have begun to grieve for the woman, the icon, and the queen of modern-day dissent. 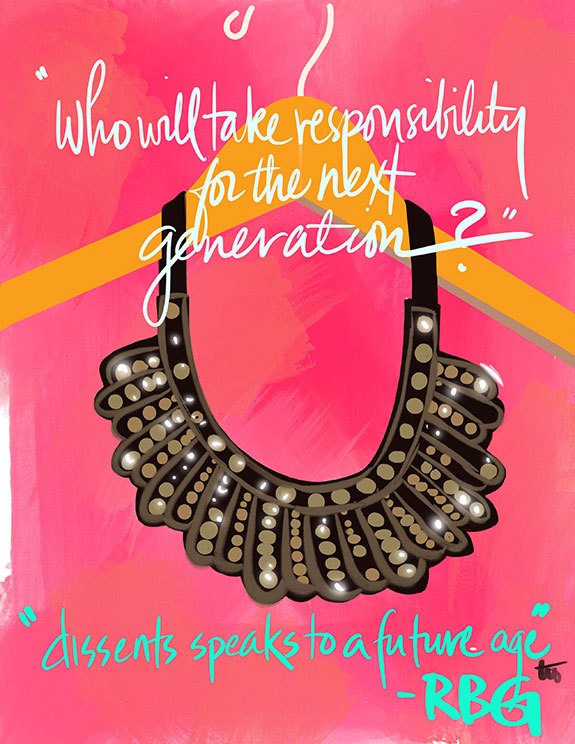 It was only in the last few years that I learned the meaning of her collars, and that they had meaning at all beyond seeming well thought out and fashionable. The collars were chosen carefully and worn with responsibility. The fact that some were distinctively feminine, even girlish in some cases is not lost on me, that they were chosen by a 5’1” dynamo proclaiming her womanhood and her equality with every man who sat alongside her gave me hope. 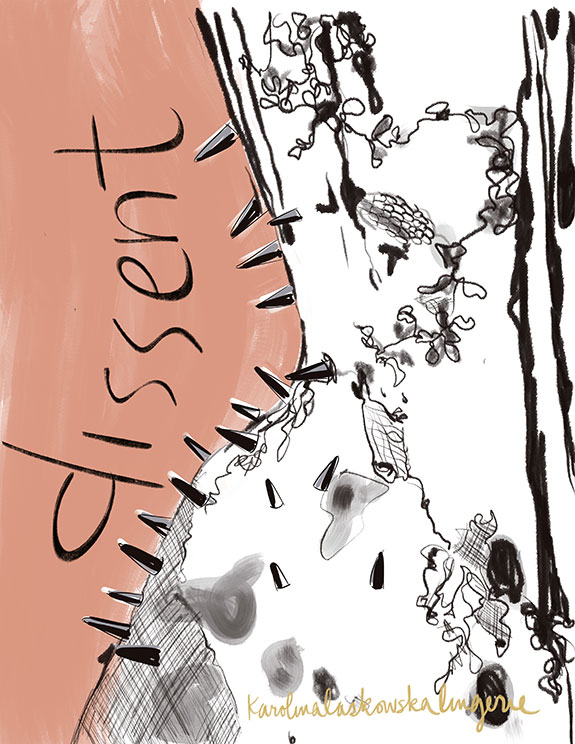 Justice and fighting for all our humanity is her everlasting legacy.  I believe her influence on fashion and pop culture will go far beyond the t-shirts, keychains and mugs we are all clamoring to buy and will influence apparel. Tulle, lace, spiked metal, studs, and beads were all a part of her armor in the battle she so bravely fought. Her DISSENT collars which she wore for occasions such as the Hobby Lobby contraception case, the day after the current WH occupant was inaugurated or the addition of the last justice to the Court were brilliant and calculated. They were spiked bits of metal or studded and resembled medieval necklaces and I wish I had one now. How they may influence intimate apparel is anyone’s guess, but we already have fantastic examples of strong femininity from a Norwegian designer that are works of art. Check out @karolinalaskowskalingerie for works that defy description. 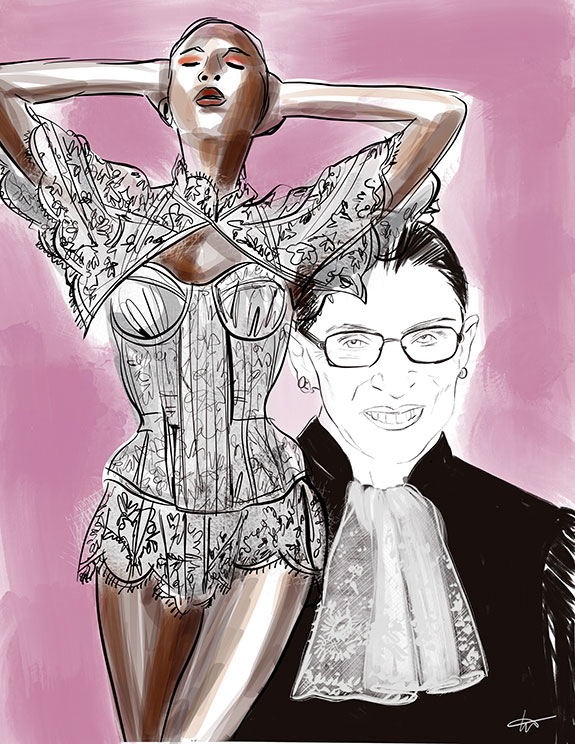 There were collars that spoke beautifully to VICTORY, that she wore on the heels of a some of the Court’s decisions.  I always reacted most to the white collars, like the lace jabots that she began wearing with her fellow justice Sandra Day O’Connor, and while the most ‘conservative’ of her collars, definitely no pun intended, these Victorian-esque draped columns suggested a rather demure and passive jurist, perhaps to throw the opposition off guard.  I would be remiss if I did not acknowledge the influence of the late intimate apparel icon Eileen West, who pioneered and made fashionable pleats, tucks, tailored white cotton and lace and turned them into a lasting brand, there is a wealth of vintage inspiration in her earlier collared night shirts and pleated gowns. 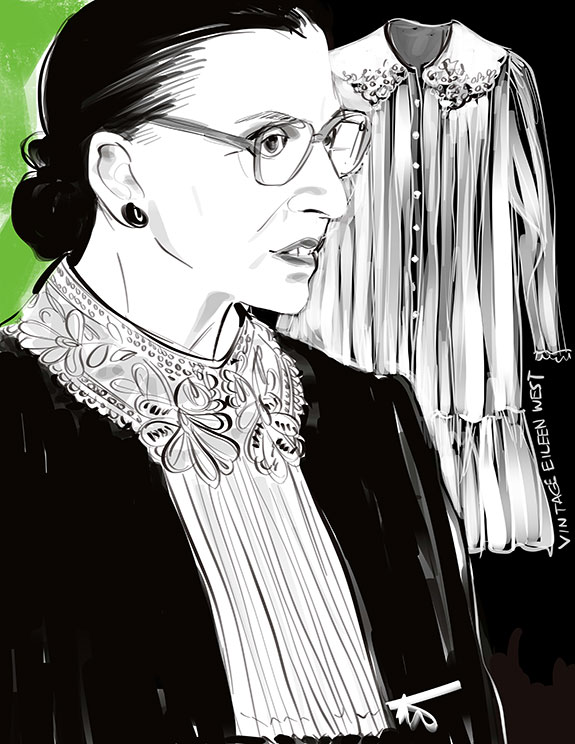 Perhaps RGB’s most discernible piece, the white circular fishnet collar that she seemed to wear more than any other, gave me the sense everything would be okay when I saw her in it, it gave me the sense that our country was still on course to be better, to be kinder and more just, it would take time, but I knew she would help thrust us along. Now I am not so sure, my hope has given way to droplets of despair, but the battle in a little over 40 days cannot be won unless we put on our victory collars and flood the polls with dissent. VOTE…. be careful and keep your eyes on the prize. Peace. 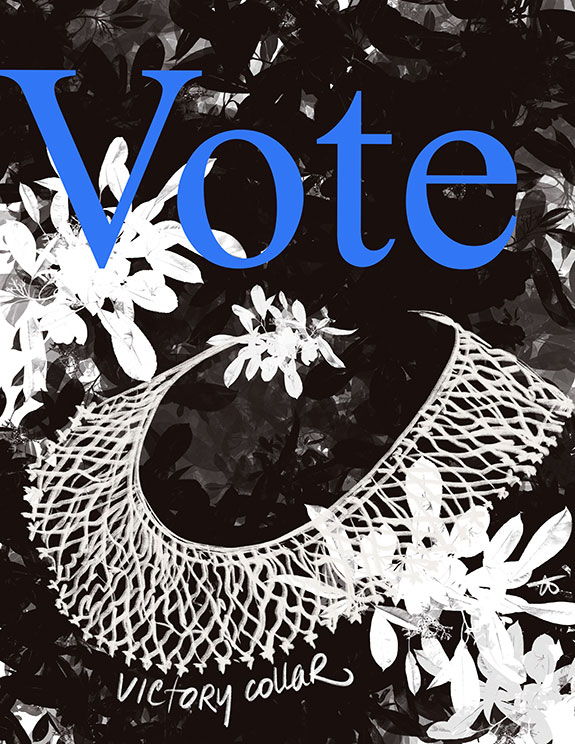